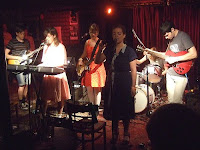 Yesterday I posted the song Honey bee by A Smile And A Ribbon. Today singer Rebecca Mehlman returns in '5+1=6 questions for...'

The Pop! For Kids Project: Hello Rebecca! What have you been up to recently?

Rebecca Mehlman: We've been rehearsing and recording the songs for our second album. Martin and I recorded the last album on our own, but this time around the other four members of the band will be an important part of the process as well. Instead of Martin's bedroom, we plan on recording most of the songs in our rehearsal room or in a studio. If you thought the lyrics on our debut album The Boy I Wish I Never Met were depressing, you've seen nothing yet!

RM: My mom played Mozart's Elvira Madigan repeatedly for me when I was in the womb, and then again when I was born, so I would feel at home.

RM: Absolutely! Children remind me of people who are high, their senses are so keen and open to the world around them: colors, songs, beauty, feelings, and their imagination knows no limits.

RM: You get to travel even if you're too poor to afford a ticket, being in a band is like having a family, you get to turn life into art, people think you're cool, and I've heard you get lots of boys.

RM: Disney has made some memorable tunes. I loved Once Upon a Dream from Sleeping Beauty when I was a kid, and I still do.

TP!FKP: What can you tell us about the recording of Honey bee, both the 1986 part and the grown-up part?

RM: Well the 1986 part is pretty personal, and I think listening to the song says it all. As for the grown-up part, I remember being inspired by Pascal Comelade and children's instruments. I went to the toystore and bought a xylophone (wood) among other things. 'Honey Bee' is a pretty bittersweet song, especially when I hear the distance between who I was in 1986 and and who I am today in that tiny voice. I don't think I knew what bitterweet was.

TP!FKP: Thank you Rebecca!
Posted by Dennis on Saturday, February 19, 2011
Labels: A Smile And A Ribbon, interview